The “Macalube of Aragona” nature reserve, situated 15 km from Agrigento, within the municipalities of Aragona and Joppolo Giancaxio (AG), was set up to protect the very rare phenomenon of the so-called “cold mud volcanoes”. Besides the geomorphological and structural aspects, the site is important for the processes of methane formation. The scientific research activities promoted by the Managing Body have highlighted faunal and botanical interesting features.

The territory of the reserve is divided in two areas depending on the environmental peculiarities and the different use purposes:

Zone A is forbidden to human enjoyment and is restricted only to conservation and scientific research purposes.

The protected area is included in the Natura 2000 sites due to the presence of priority habitats and of plant and animal species with biogeographical and / or conservational interest.

The territory of the reserve is similar to the typical Sicilian hinterland landscape, with a prevalence of hills with rounded slopes, due to the presence of argillaceous-marl deposits, cut across by a dense network of shallow valley furrows, where precipitation waters flow during autumn and winter months.

A circular heath stands out against this background. It is covered by ashen clay, and cracks from which small cones rise, almost reminding one of a lunar landscape, and from which streams of clayey mud emerge: it is the so-called Vulcanelli Hill.

It is a rare geological phenomenon, morphologically similar to the volcanic one; it is called sedimentary volcanism and is one of the superficial gaseous oil manifestations. Due to high pressure, gas rises to the surface through fissures, forcing upwards clay sediments and water. This material then falls down on the surface where a more or less regular mud dome forms, and through the top crater the gas is released. The gas mixture erupted by the Macalube of Aragona consists mainly of methane, with low concentrations of carbon dioxide, helium and traces of other constituents. Their origin is biogenic, thus excluding any connection with volcanic phenomena. 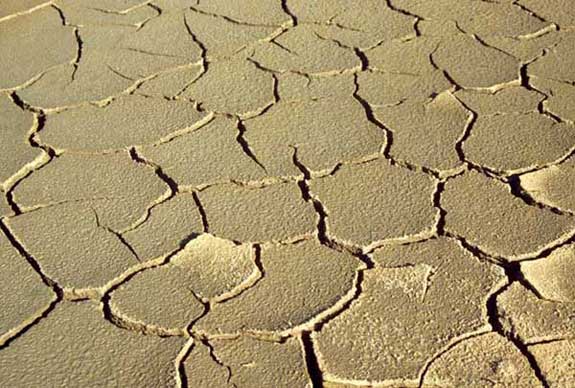 The Macalube mound is locally called “Occhiu di Macalubi” (the eye of Macalubi) for its round shape and the whitish color of the crystal powder ejected from the mini-volcanos and deposited through evaporation of salt-rich waters. Periodically, when the normal gas outlets are blocked and the pressure of the gas below the surface exceeds the lithostatic pressure, explosive eruptions will interrupt the normal release of gases. During such events, huge amounts of clay mixed with mud, water and gas are emitted at a considerable height (in geology this phenomenon is called “macalube”, probably the word derives from the Arabic “maqlùb” that means overturning). The exceptional peculiarity and extent of the geological phenomenon make the reserve an absolutely unique place. 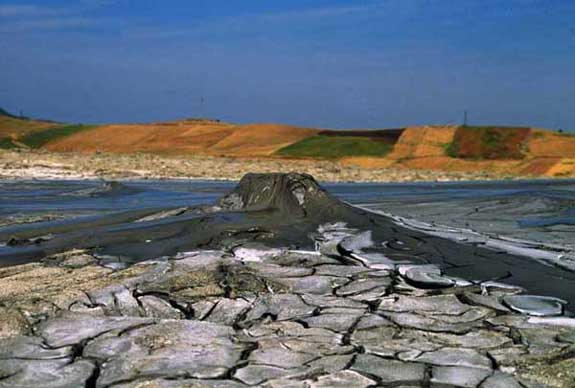 The Macalube area is characterized by a certain floristic “originality” compared to other inland areas of western Sicily, due to its climatic, geological and geomorphological features. In fact, severe aridity, especially in summer, and the existence of rocks with low permeability, typical of this terrain, highly affect the vegetation that consists mainly of herbaceous plants.

Prairies are the most representative areas. The major vegetation types are perennial grasses, such as Lygeum spartum, and shrubs characterized by succulent woody species, such as Salsola agrigentina. Various remarkable herbaceous species, such as Sorrentine Aster (a species protected by European directives), the Scabiosa dichotoma, the Allium lehmannii and the Lavatera of Agrigento grow within these areas.

The reserve has been included in the Site of Community Importance due to the presence of priority habitats (steppe-like vegetation with grasses and annuals: Therobrachypodietea) and of plant species of great interest from a biogeographical and / or conservational point of view, including several species of orchids: Ophrys bertolonii, Ophrys bombyliflora, Ophrys lutea, Ophrys sphecodes subsp. garganica, Ophrys tenthredinifera. 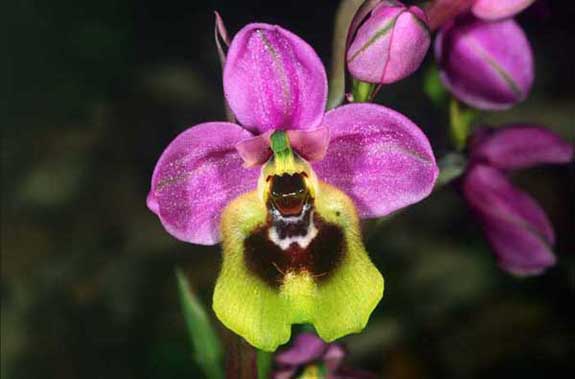 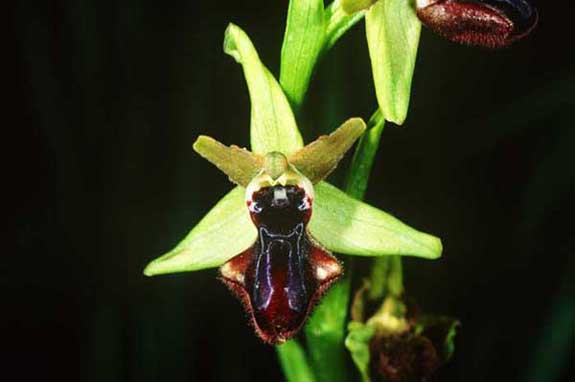 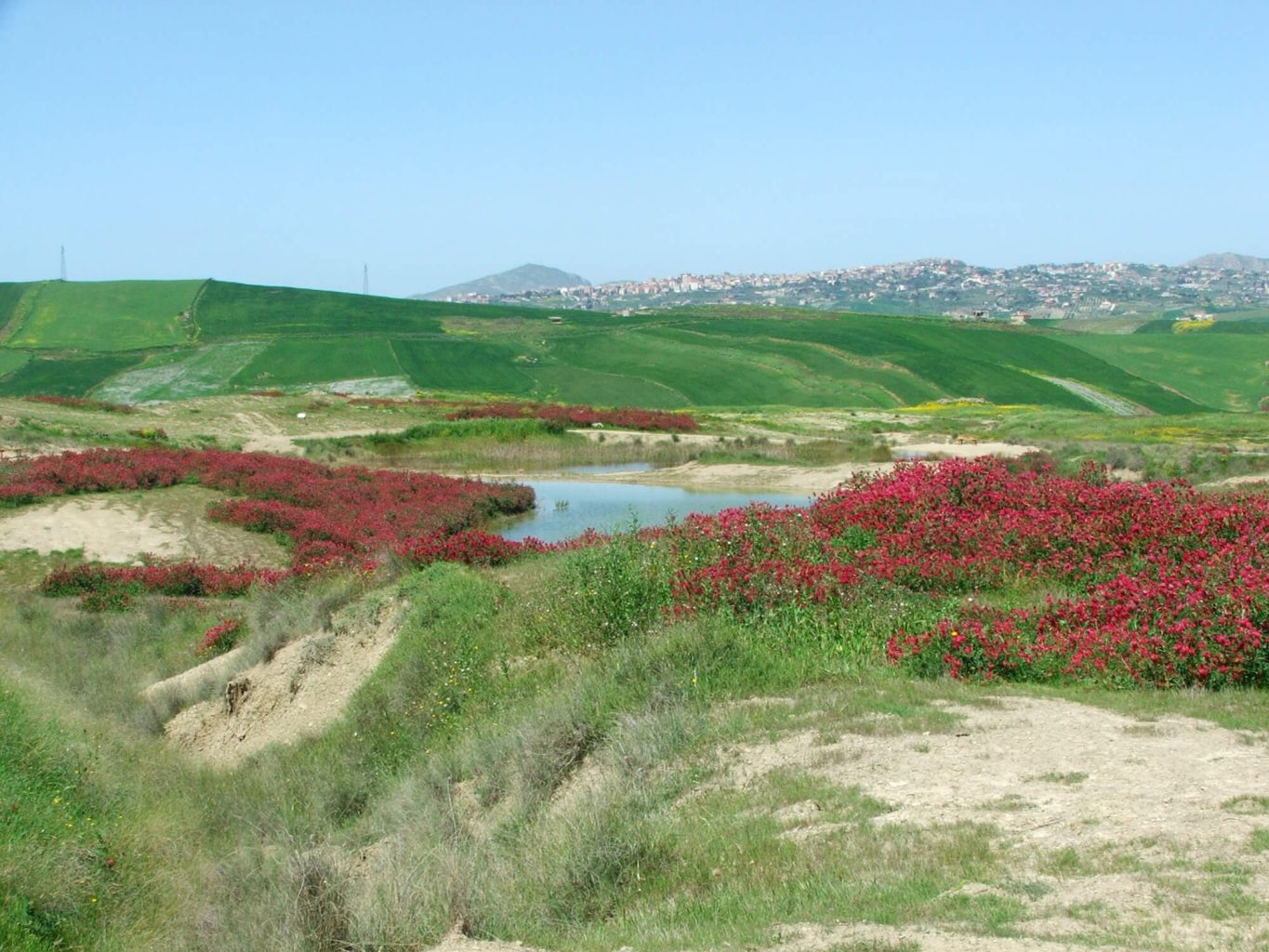 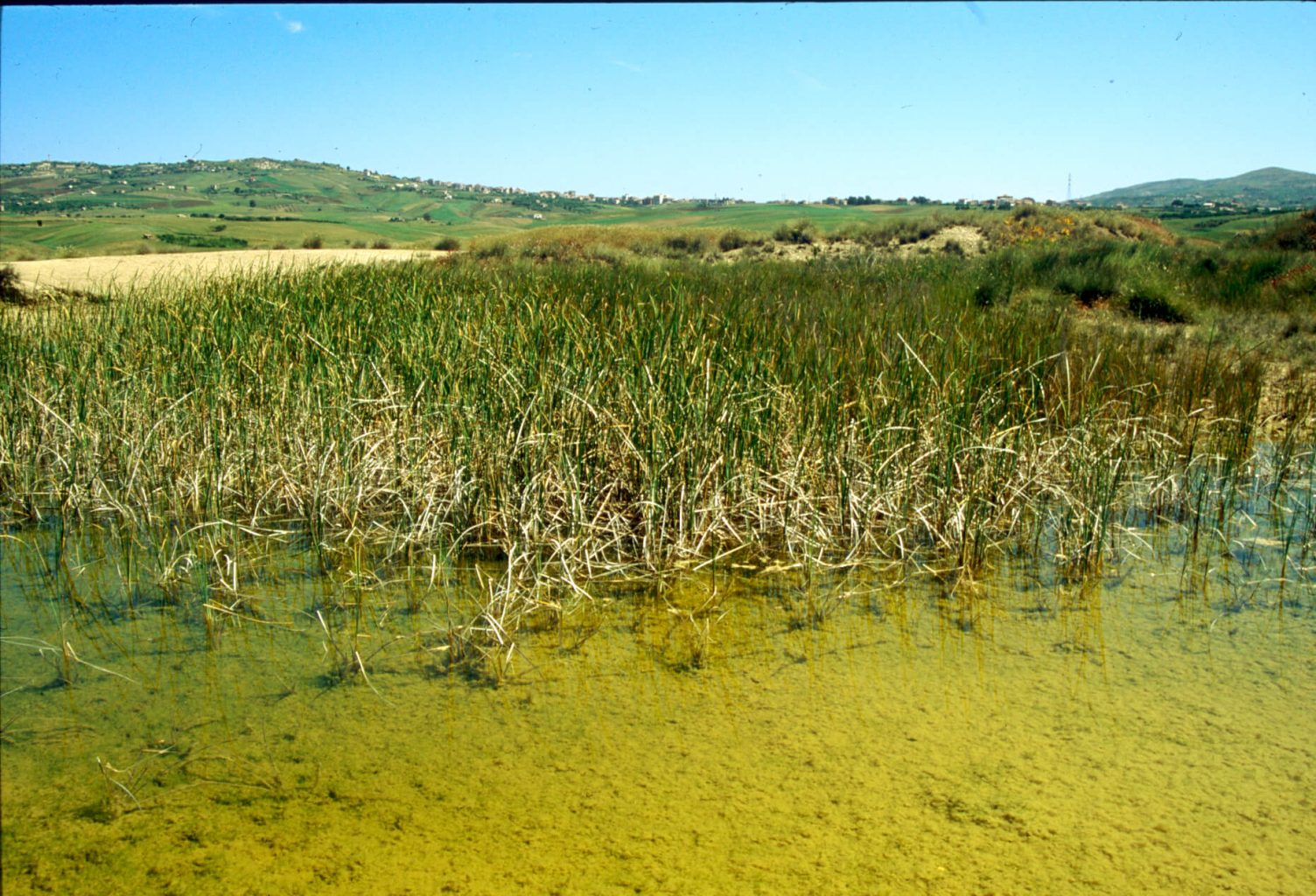 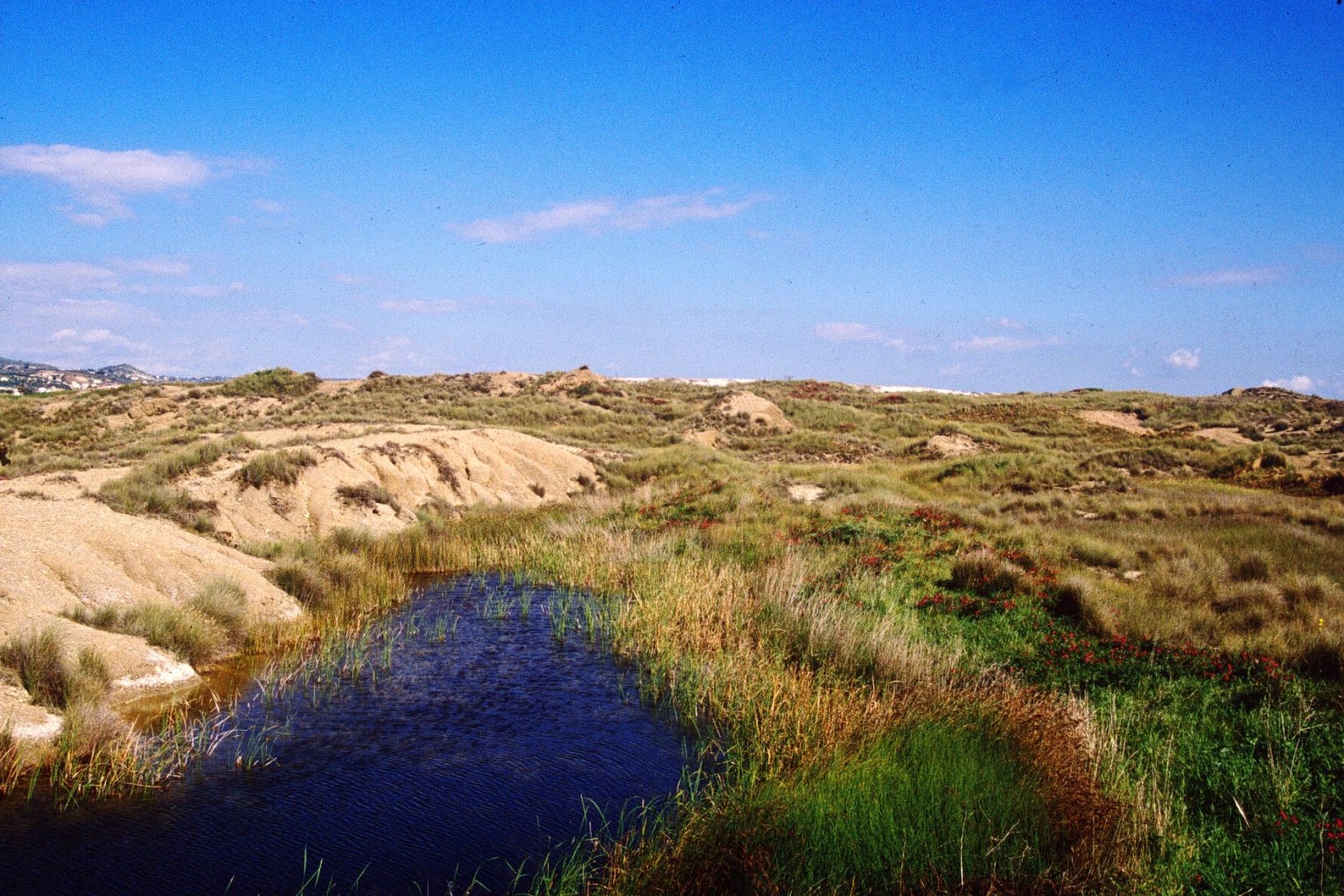 It may seem strange that an apparently barren environment, such as the one of the reserve, can host wildlife features. However, the presence of “steppe-like” environments and, at the same time, of water pools, classifiable as temporary Mediterranean ponds (considered habitats of community importance), determines a remarkable faunal diversity. The small humid habitats, mostly existing during summer, are sites of crucial importance for the development of the entomological fauna, especially dragonflies, hemiptera and aquatic beetles, as well as for the presence of amphibians (Discoglossus pictus, Rana lessonae) and a consistent population of reptiles, such as the Sicilian lizard, the skink, the Aesculapian and the Green whip snakes.

Besides helping the reproduction of various predatory species, mostly insects, the bodies of water are also the hunting ground for various bird species  (common kestrel Falco tinnunculus,  marsh harrier Circus aeruginosus), as well as, during migration periods, an essential stopover site for migratory birds. These small “oases” that birds find along their route, allow them to recover the necessary energies to continue their long journey. The presence of biogeographical and / or conservational interesting species, such as Lepus corsicanus, Anthuis campestris, Calandrella brachydactyla, Melanocorypha calandra, made it possible to classify the reserve area as a Site of Community Importance. 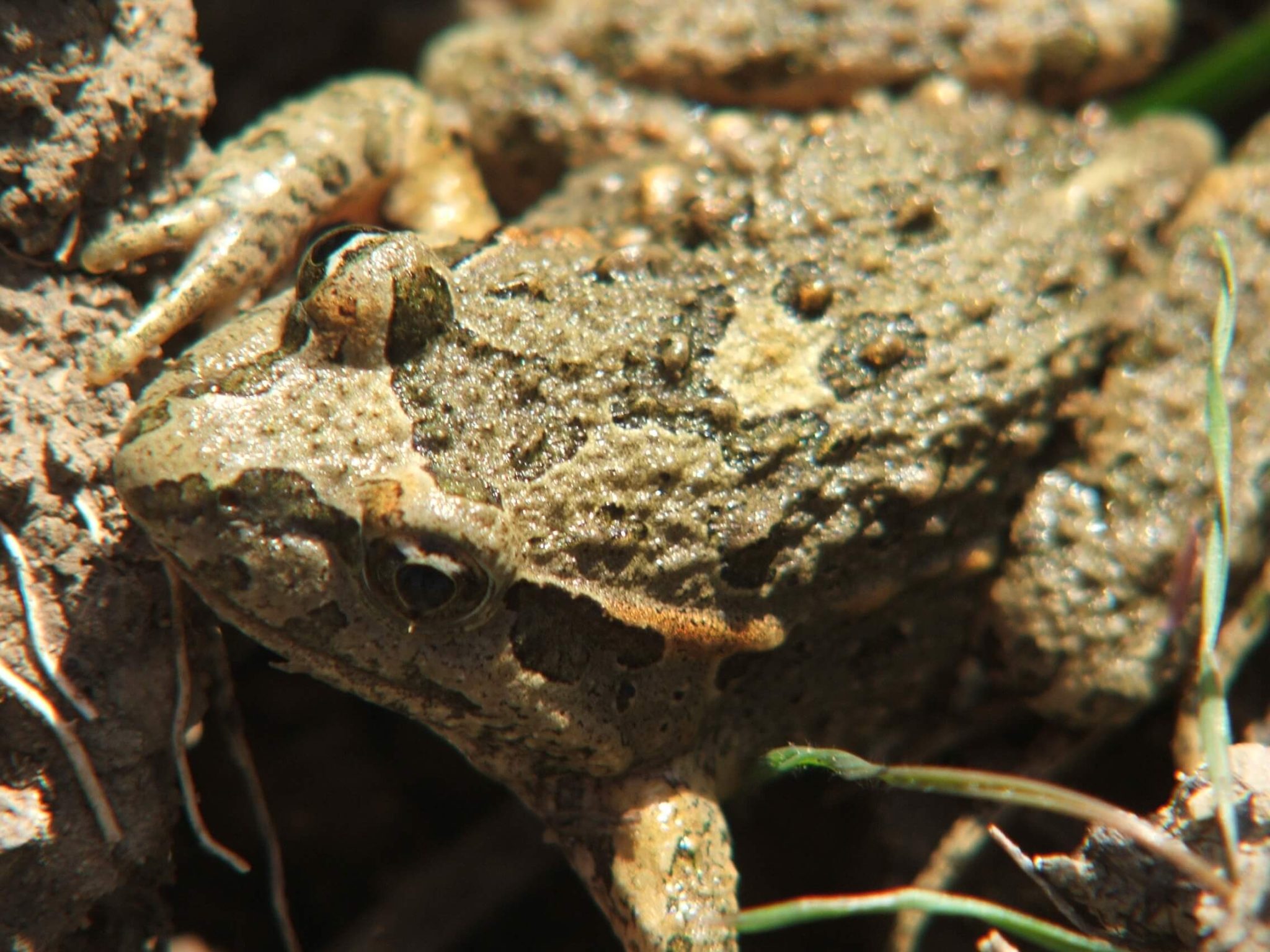 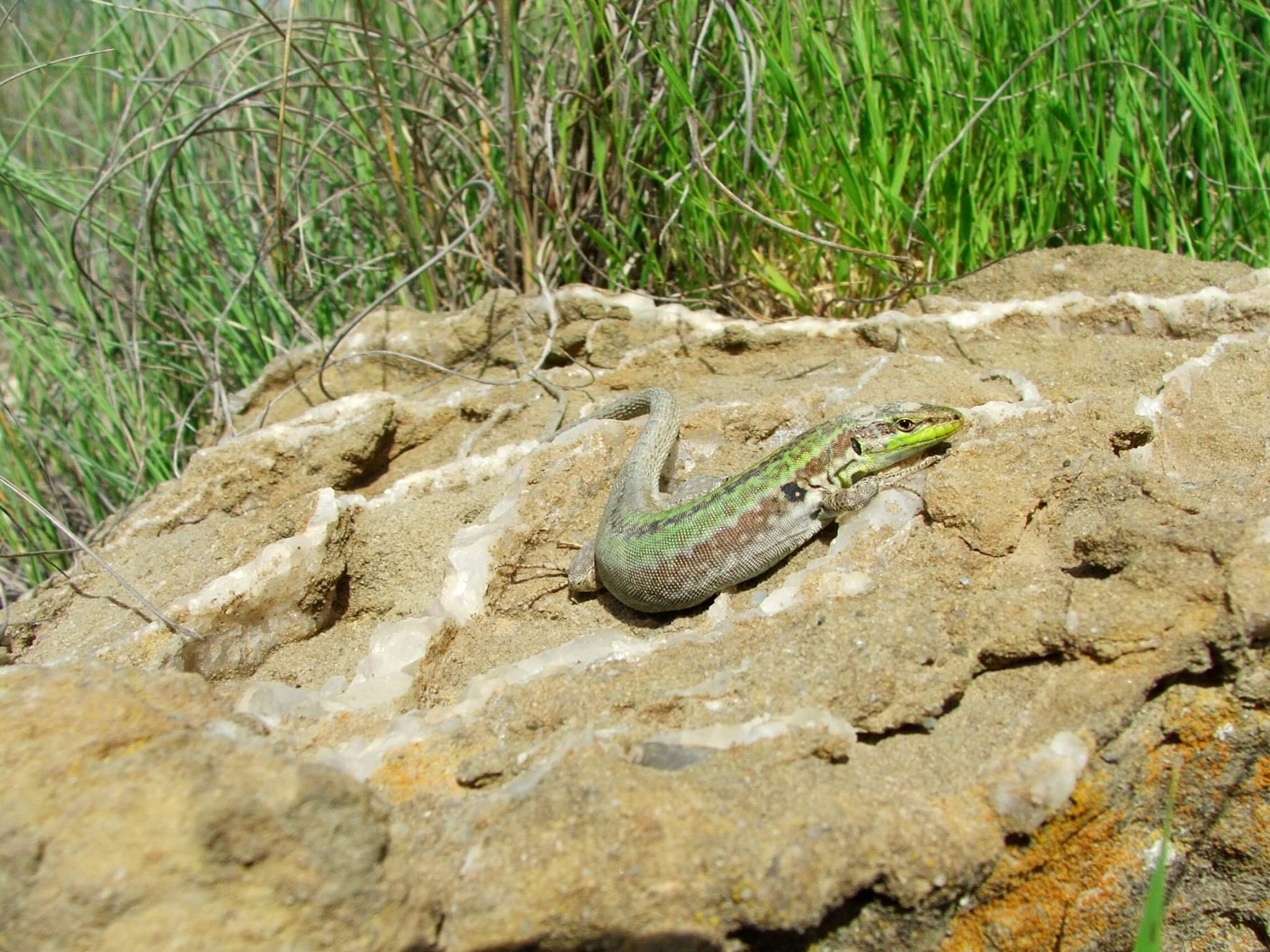 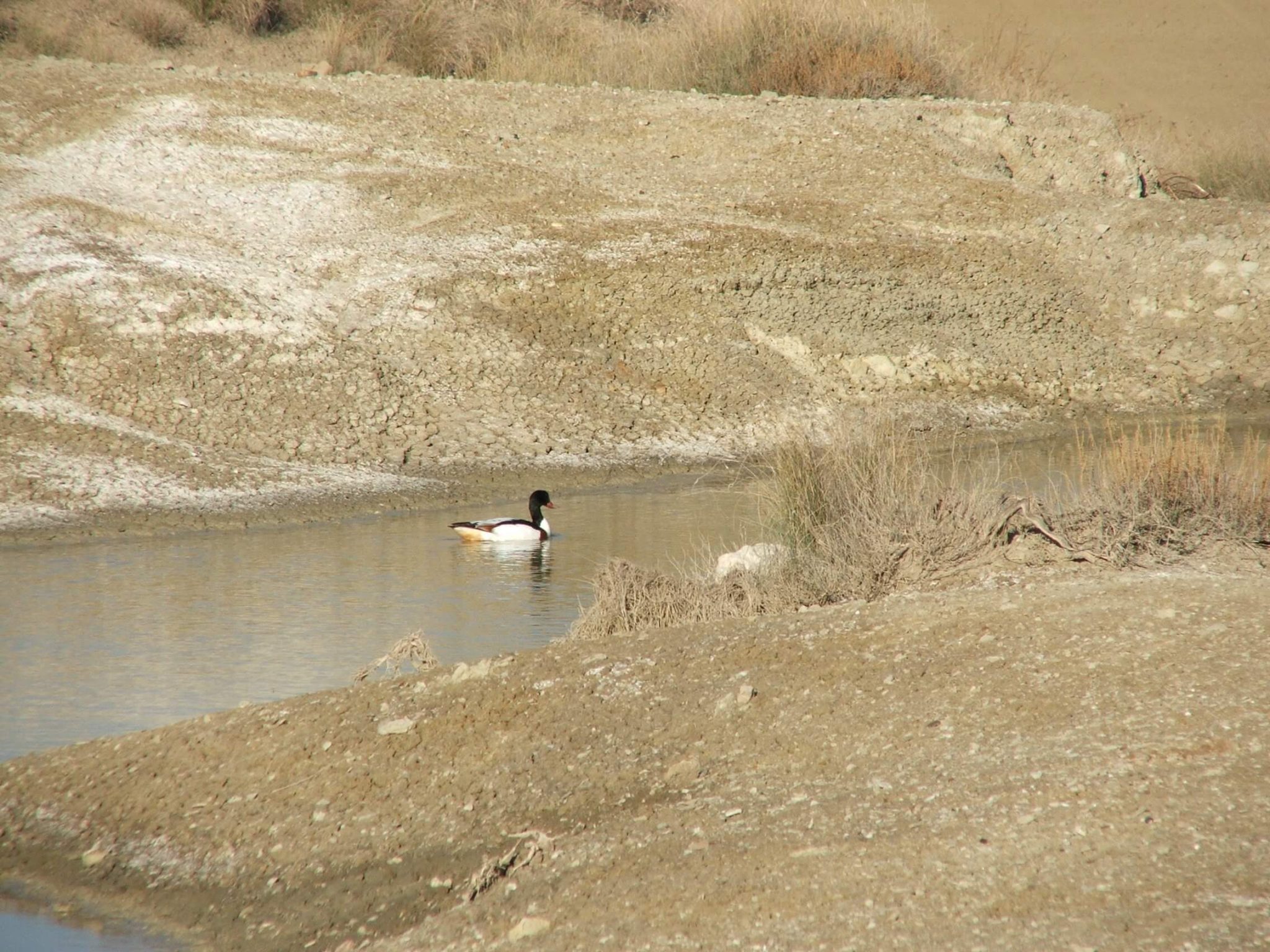 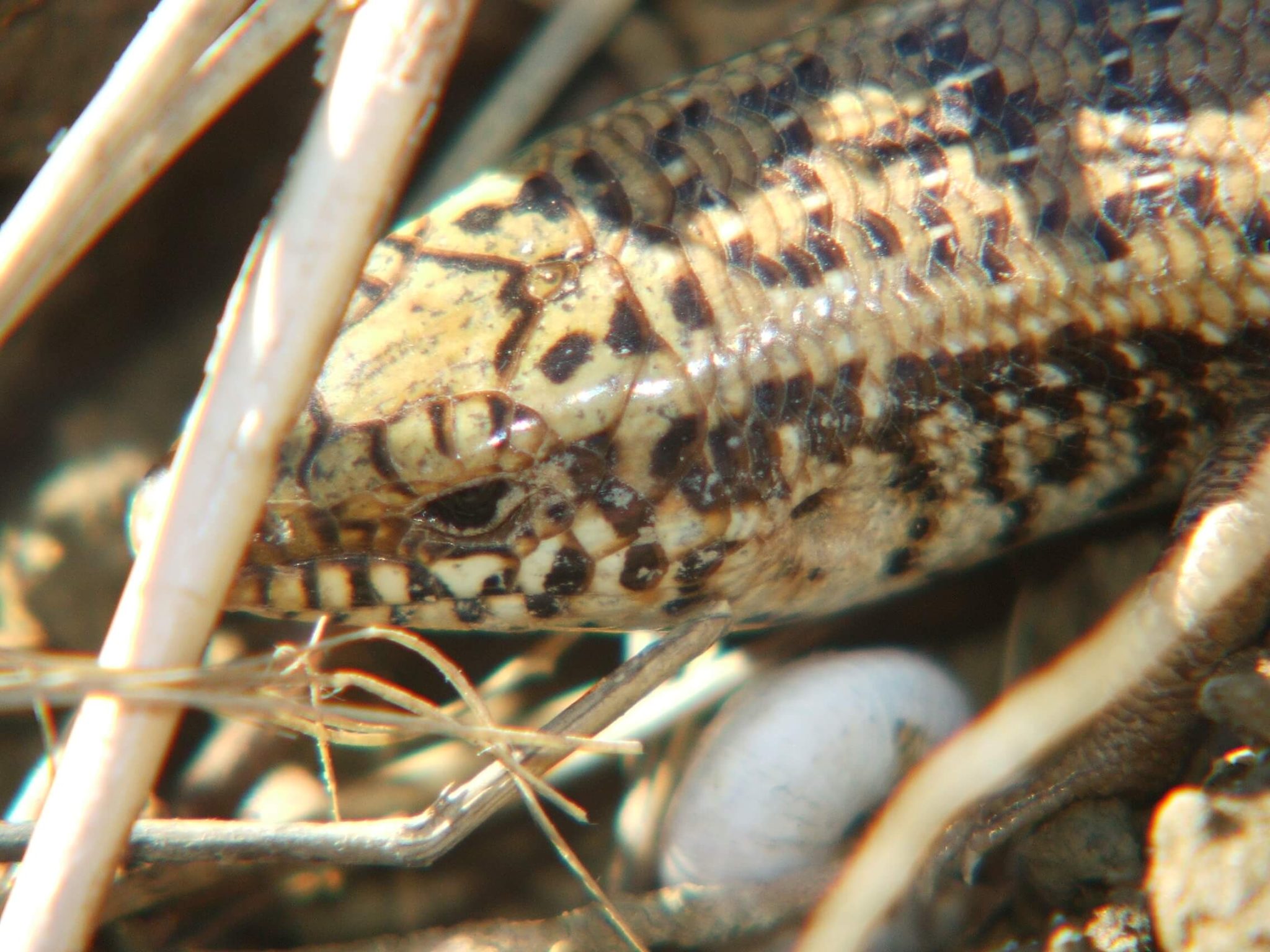 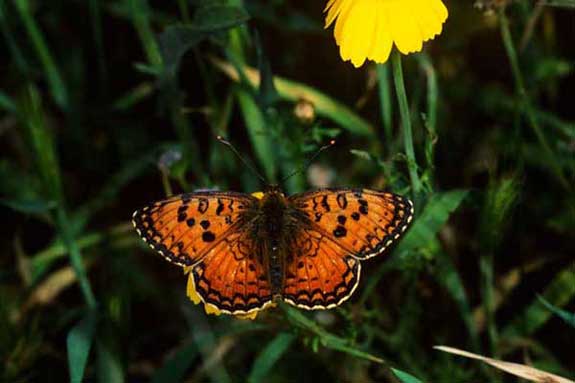 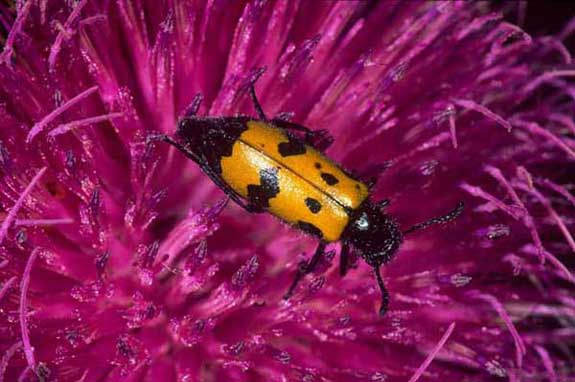 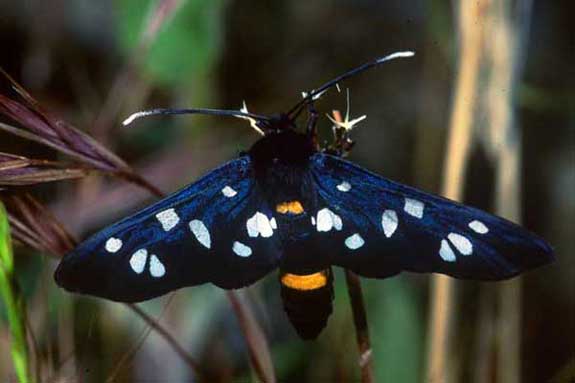 Many foreigners traveling to Sicily have been attracted by the scientific interest of the Macalube area and its aura of mystery. The oldest observations about the Macalube phenomenon are ascribed to Plato and Aristotle. Since the early 1800s, this site has been a favorite destination for Sicilian and foreign botanists and herbalists, including Gussone, Splitgerber and Todaro. Tommaso Fazello describes “muddy waterjets continually coming out of different mouths”, while Guy de Maupassant considered the volcanoes as pustules of a terrible disease of nature.

Popular imagination has raised various legends and beliefs about the Macalube. One of the most common one is related to the “submerged city”. It is said that “once upon a time, where now the Eye of Macalubi is staring at, there was a village called Carthage. During a religious ceremony dedicated to the patron deity, somebody offended the god by carrying a dog in procession. The faithful people got angry because of the offense and asked the god to punish the infidels. All of a sudden, amidst tremendous roars and tremors of the ground, the entire village sank into the depths of the earth while a desolate land, scattered with many small cones expelling mud, appeared in that place: today’s Macalube. From that day on, every seven years at midnight, a rooster appears in the center of the hill and when it crows, the whole village will emerge during that same ceremony, in the middle of a market full of stands and all the population celebrating. Everything bought at the stands on the hill in that moment will turn into gold, but if one looks back to have a last glimpse of the village, everything will vanish, and the Macalube will appear again.” 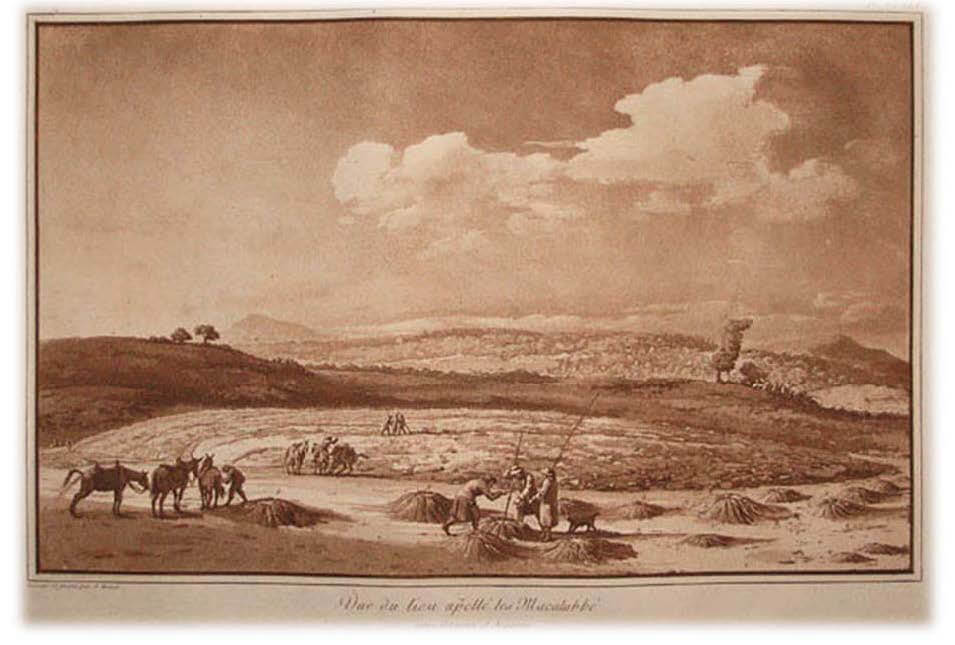 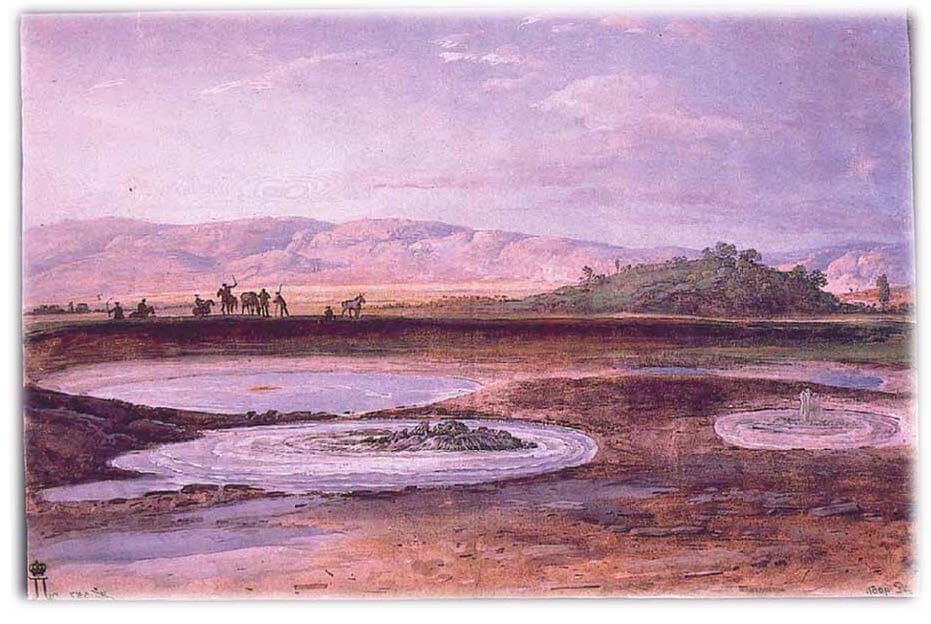 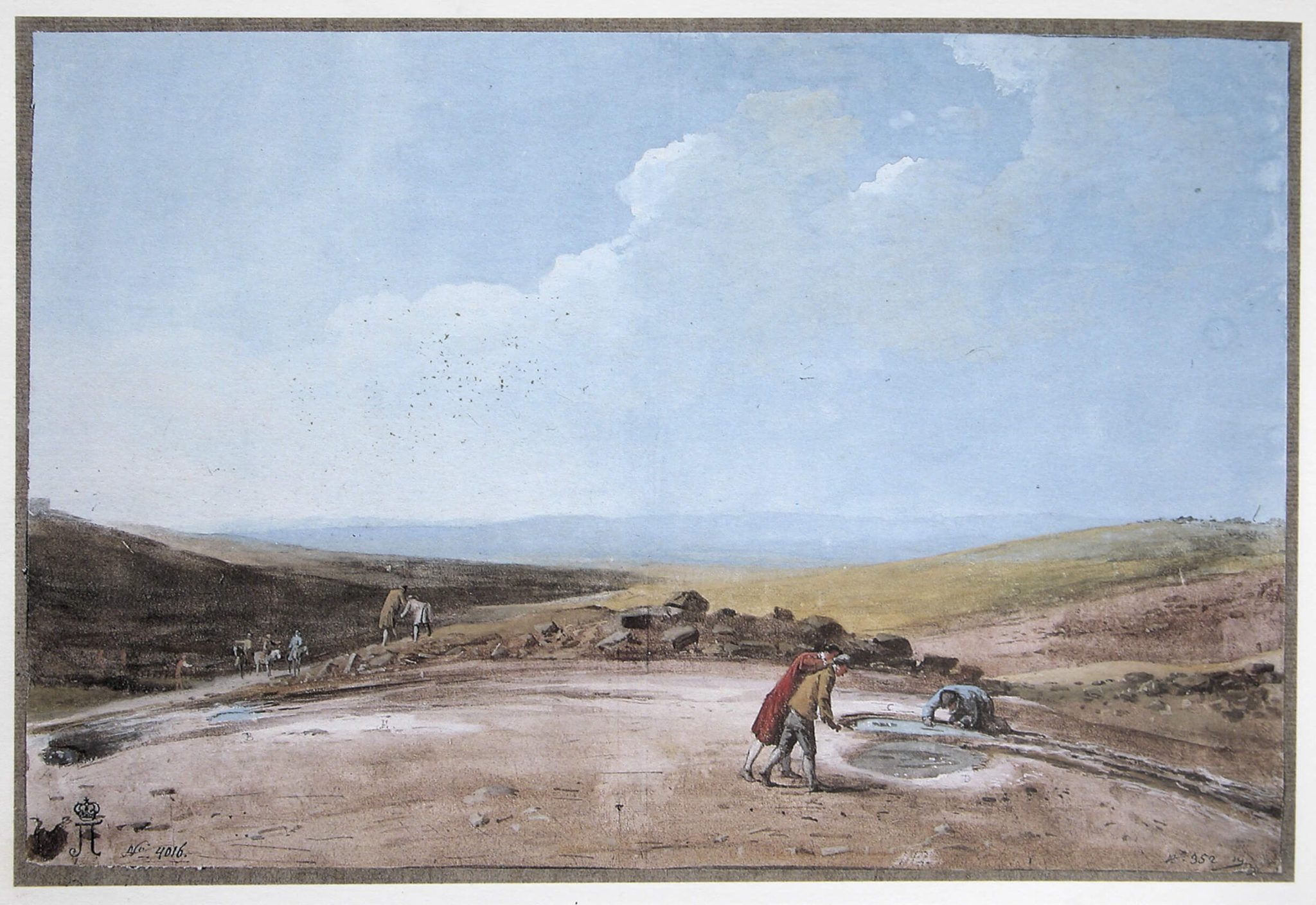 The town of Aragona was founded in 1499 on the Diesi feudal land. The development of the town, placed on one of the hills gently sloping down from the Sicani Mountains and overlooking the southern coast of Sicily, is linked to the Naselli barony. The city owes its name to Lady Beatrice Aragona Branciforte. Thanks to the “licentia populandi”, obtained in 1606 from the viceroy Lorenzo Suarez, the village started to be erected around a pre-existing nucleus of the feudal palace. The urban planning was a regular grid that delimited wide blocks in a tangle of alleys and courtyards. In Aragona there still are some of its most outstanding buildings, among which is the “Prince’s Palace”. The imposing rectangular tower of the palace, an exquisite work of art, stands above the whole historical center on the eastern slope of Mount Belvedere, on which the city is situated. It was built in the early 1700s and enriched with magnificent frescoes and an important art gallery. The vaults of the palace were frescoed by Borremans but, unfortunately, during the 1800s, many works of art were lost due to owners’ carelessness. Now that the building is public property, little is left of the splendid interior decorations, however, the palace still maintains its majestic aspect. In the historical center there are also important religious buildings, such as the church of SS. Rosario, which houses an ecclesiastical museum in the crypt, the Matrice church, the Nostra Signora del Carmine and the church of Purgatory. In the surrounding countryside stands the stronghold known as the Tower of the “Salto d’Angiò” (jump of Anjou), dating back to the 1300s, and now incorporated into a farmhouse. 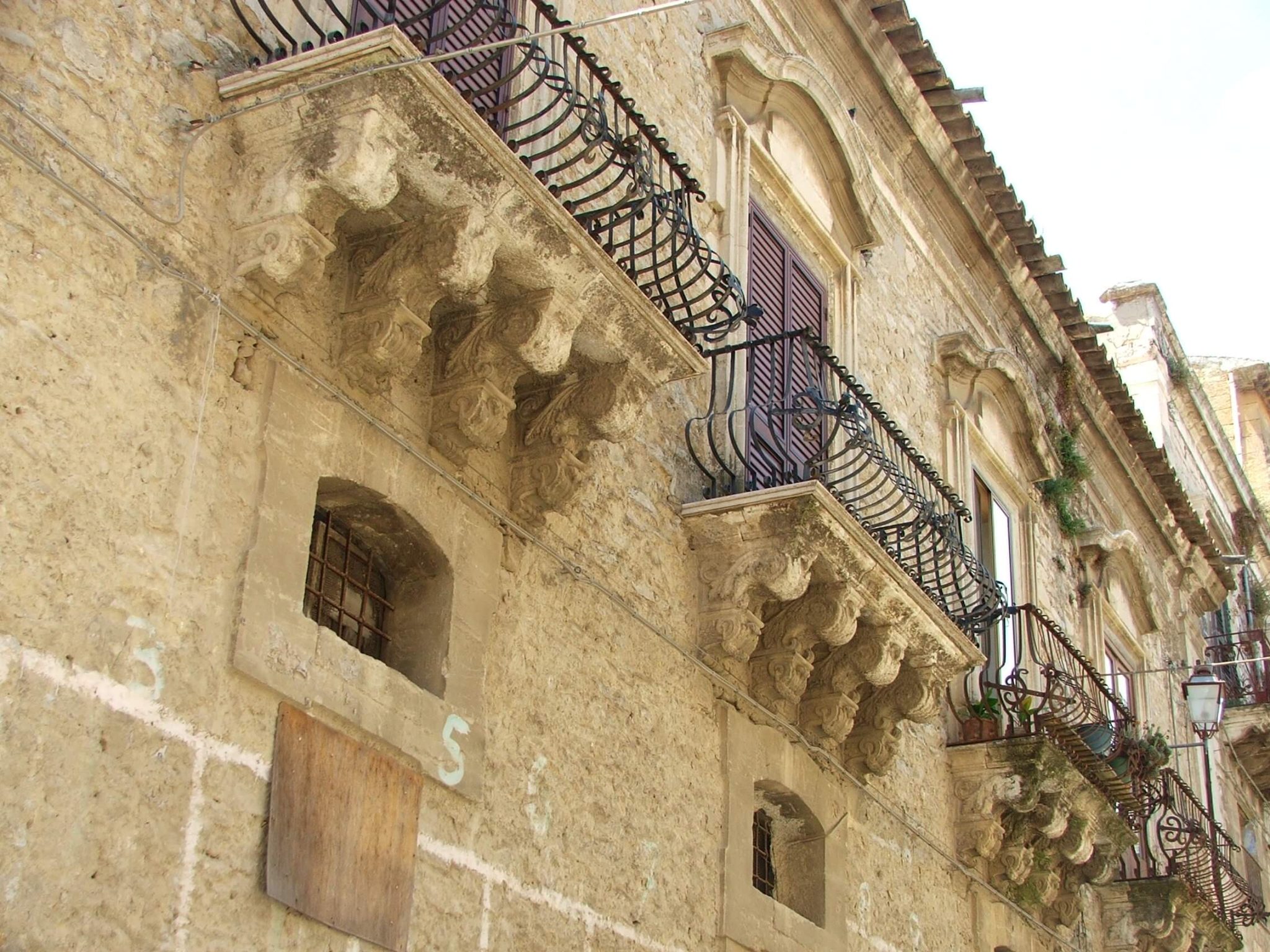 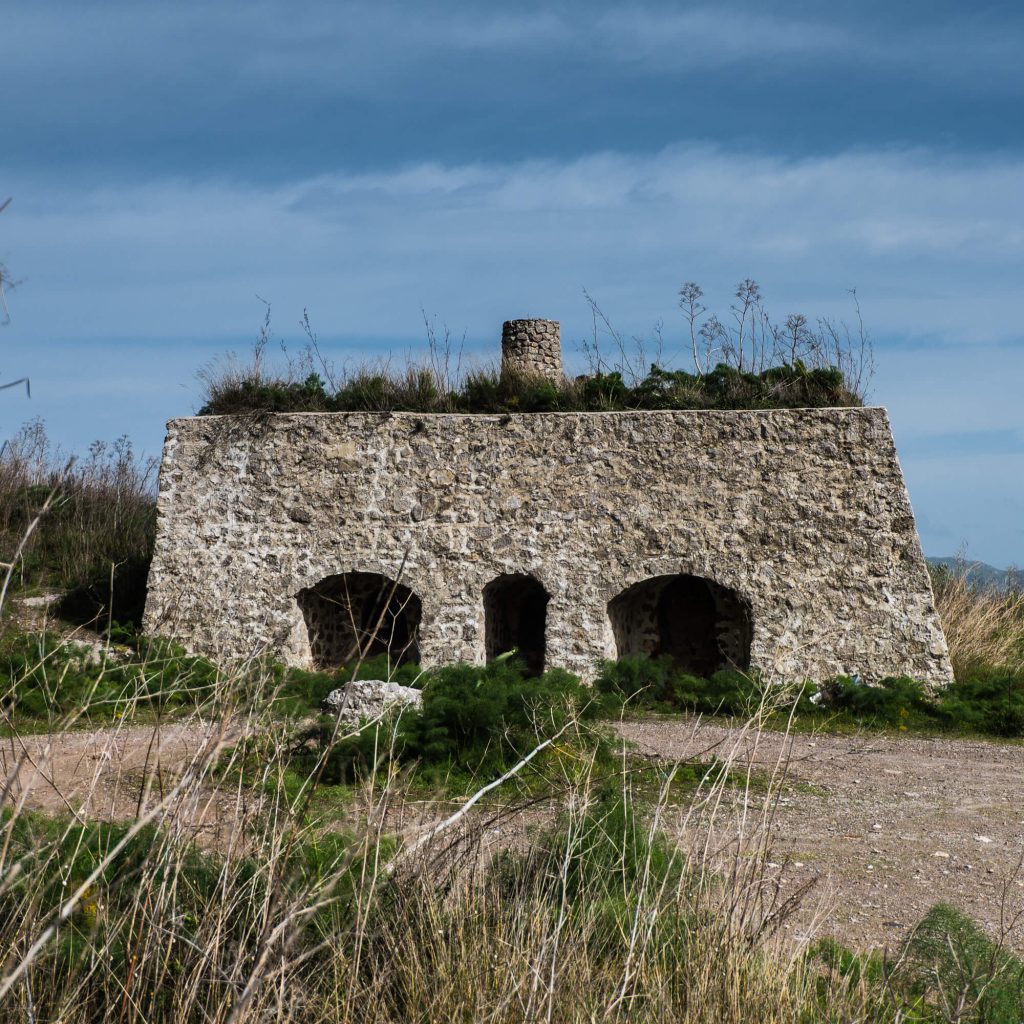 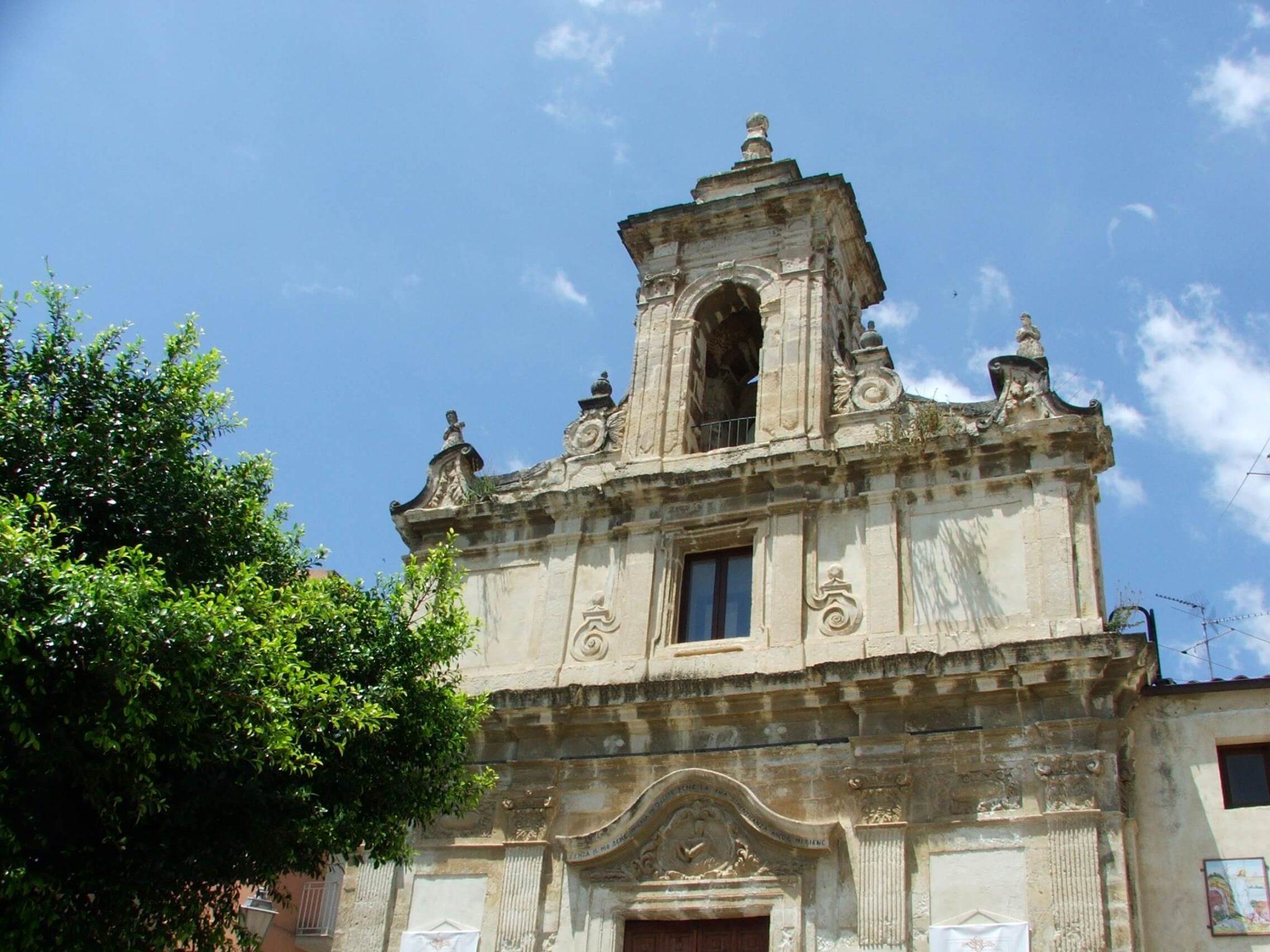 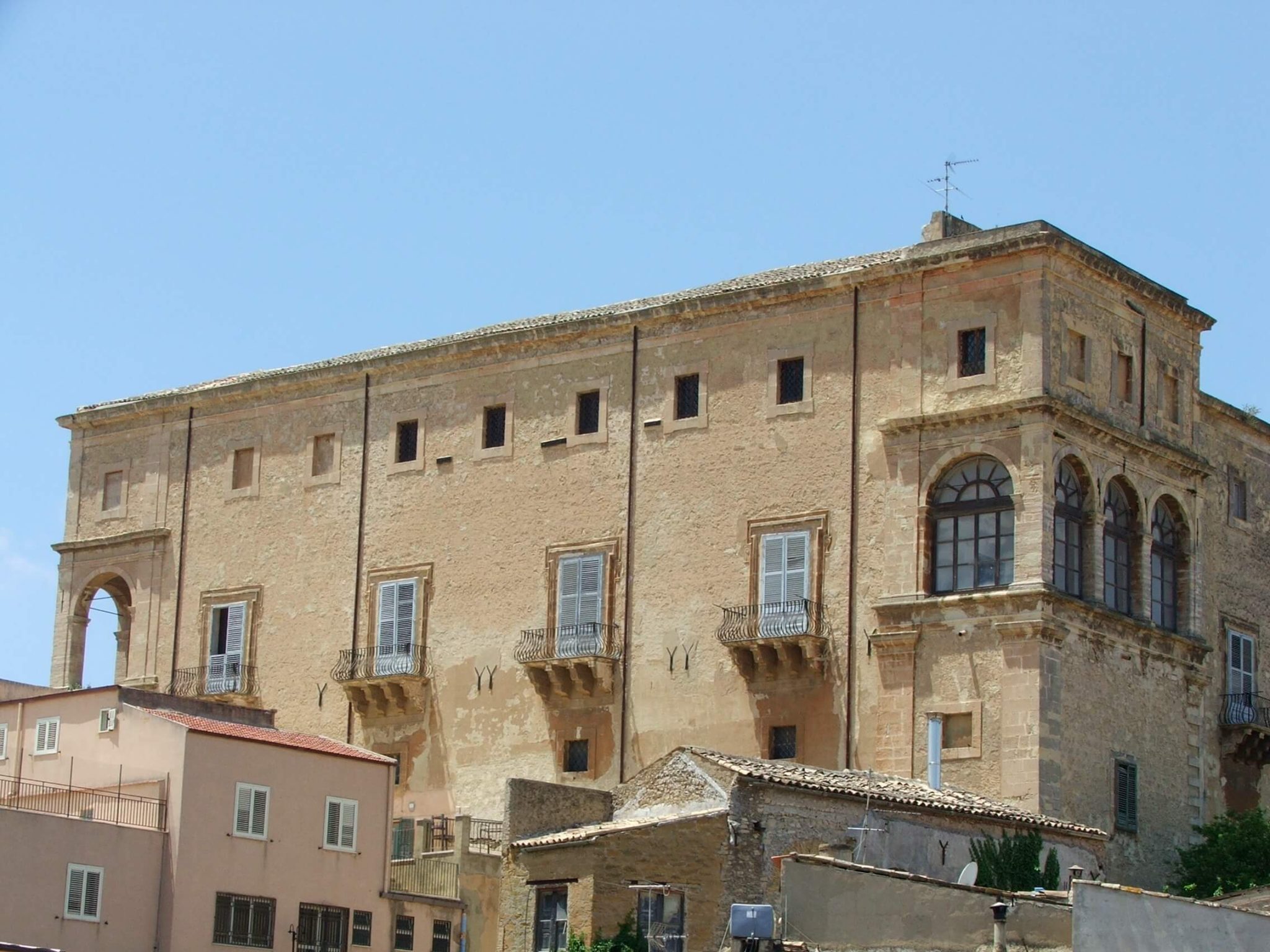