The ” Carburangeli Cave” is located on the coastal plain that extends below the town of Carini (PA). The access is through three openings at an altitude of 22 m above sea level, at about 600 m from the actual shore line. In 1996 the homonymous Nature Reserve was established according to the Regional Law L.R. 14/88 in order to protect and enhance the cavity, as a site of speleological, paleontological and biological interest.

The territory of the reserve is divided in two areas depending on the environmental features and the different use purposes:

Since 2017 the cavity has been recognized as a geosite according to the L.R. n. 25 of 2012, due to the importance of the naturalistic aspects and the geological features.

The protected area lies within a territory characterized by carbonate and clay shale rocks the origin of which, dates back to a period that goes from the Mesozoic Era (about 225 million years ago) to the Quaternary Era (the present Era). Such rocks, which originated in two different sedimentary basins, are now closer together and overlapping due to the crust folding phenomena that occurred over the last 25 million years.

From a landscape point of view, the entire area is the result of the combination, on the one hand, of the geological features of the rocks and, on the other, of the erosive action carried out by weather / marine agents (rain, sun, ice, sea, etc.). In fact, it is possible to recognize two well distinguished main landscapes.

To the south is the mountain belt that surrounds the Gulf of Carini, characterized by pronounced reliefs and generally steep slopes.

In the northernmost area closest to the sea, however, there is a large flat land created by the slow erosion of marine transgression and regression phases of the Tyrrhenian Sea during the Quaternary period. The Carburangeli cave is situated on the wide coastal plain at the foot of an ancient marine terrace, just 22 meters above average sea level and 600 m from the actual coastline. 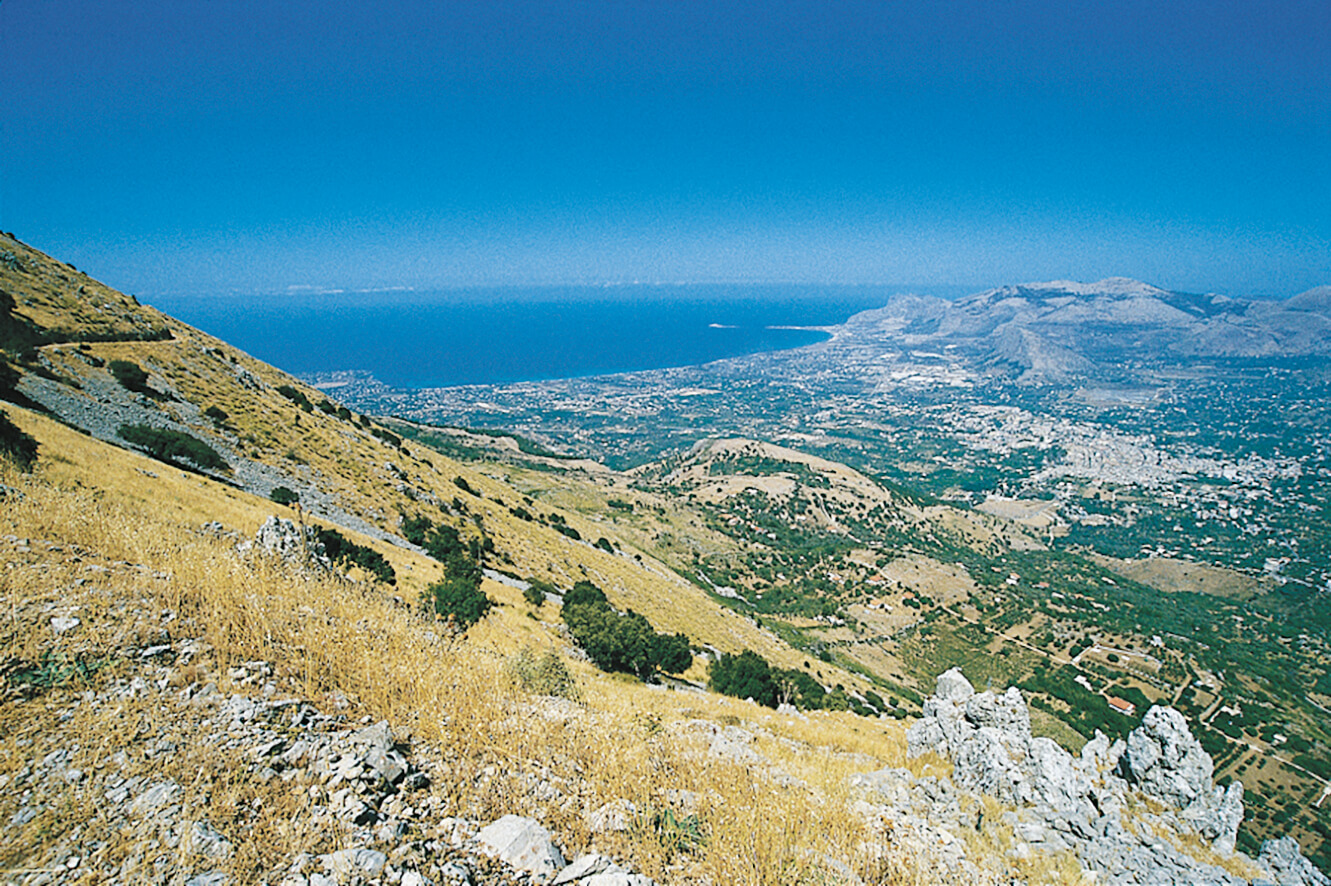 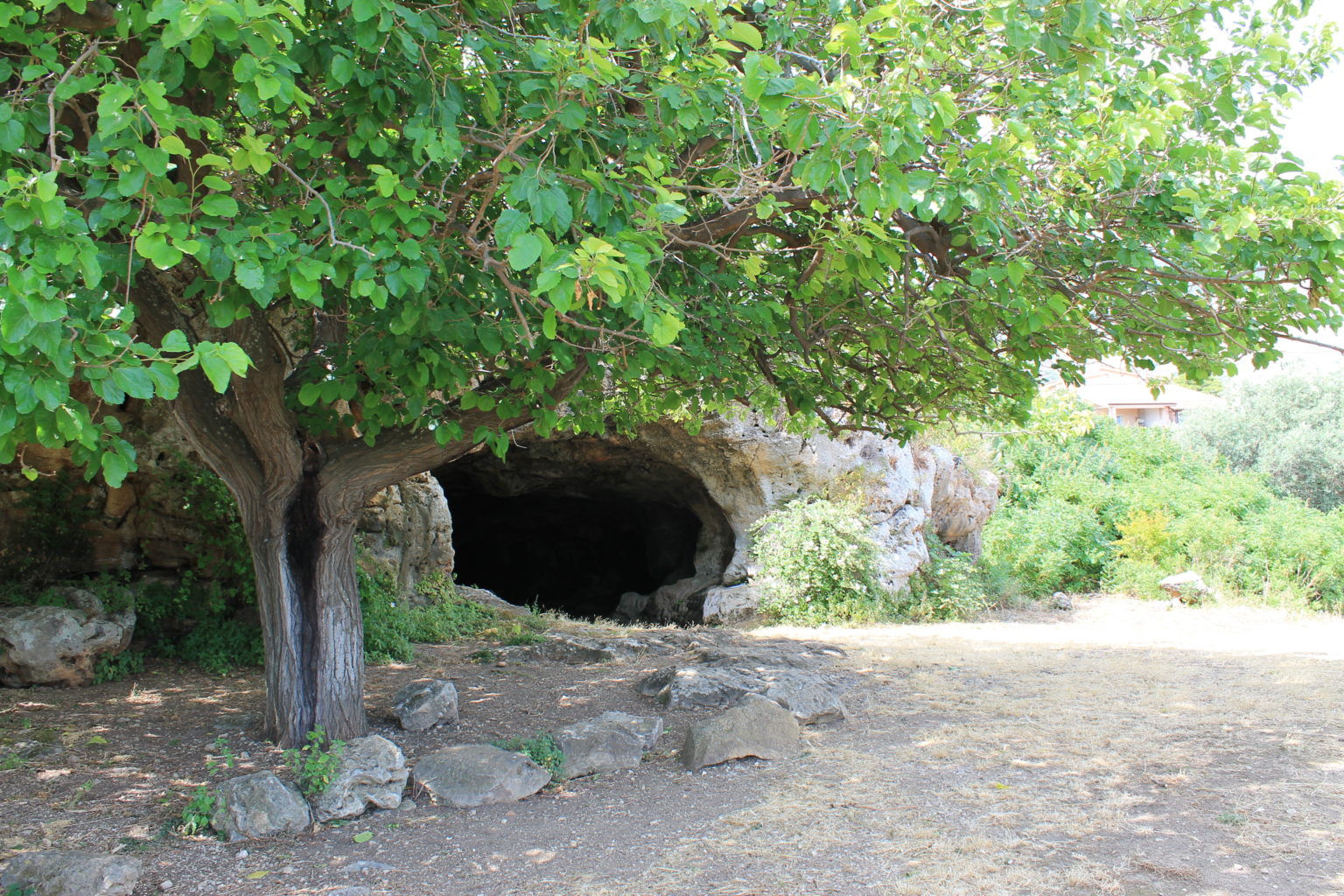 Starting from its entrances placed at the foot of a small rocky cliff, the Carburangeli cave develops underground horizontally for about 400 meters through predominantly carbonate rocks. In particular, the uppermost part of the cavity winds through calcarenite and fluvial-marine conglomerates (dating back to the Pleistocene), while in the deepest part of the hypogeum it develops through limestones and dolomitic limestones from the Upper Triassic – Early Lias. These rocks are particularly soluble in the presence of water (combined with carbon dioxide), in a chemical process that is widespread in nature and known in the geological literature as karst. The genesis of the Carburangeli cave can be attributed to this phenomenon of corrosion exerted by water in addition to carbon dioxide. Although, more in the detail, recent studies attribute to the Cave a marine –karst origin linked to the dissolution of the carbonate rocks due to a mixture of  fresh and salt water  (according to the “flank margin cave” model).

The concretions and the dissolution formations

The origin and evolution of karst cavities is closely linked to the action carried out by the underground waters which, besides slowly corroding the rocks, are also responsible for the formation of carbonate concretions as a result of the precipitation of mineral salts dissolved in it.
Inside the Carburangeli Cave, this double action carried out by water has left clear evidence along the underground course, determining morphological differences between the outer and the interior environments of the hypogeum.
In fact, on the ceiling and walls of the first chamber there are suggestive shallow and asymmetrical undulation marks, known as “scallops”, that are indicative of the predominance of the corrosion processes over those of concretion.
Further down in depth, however, the carbonate concretion fillings are prevailing. A great variety of speleothems, typical of warm temperate caves, have been created by dripping water. These take the form of stalactites, stalagmites, flowstones, etc., and when the speleologists’ helmets flash-lights shine on them for a few seconds they reveal an intense play of light and shadow. 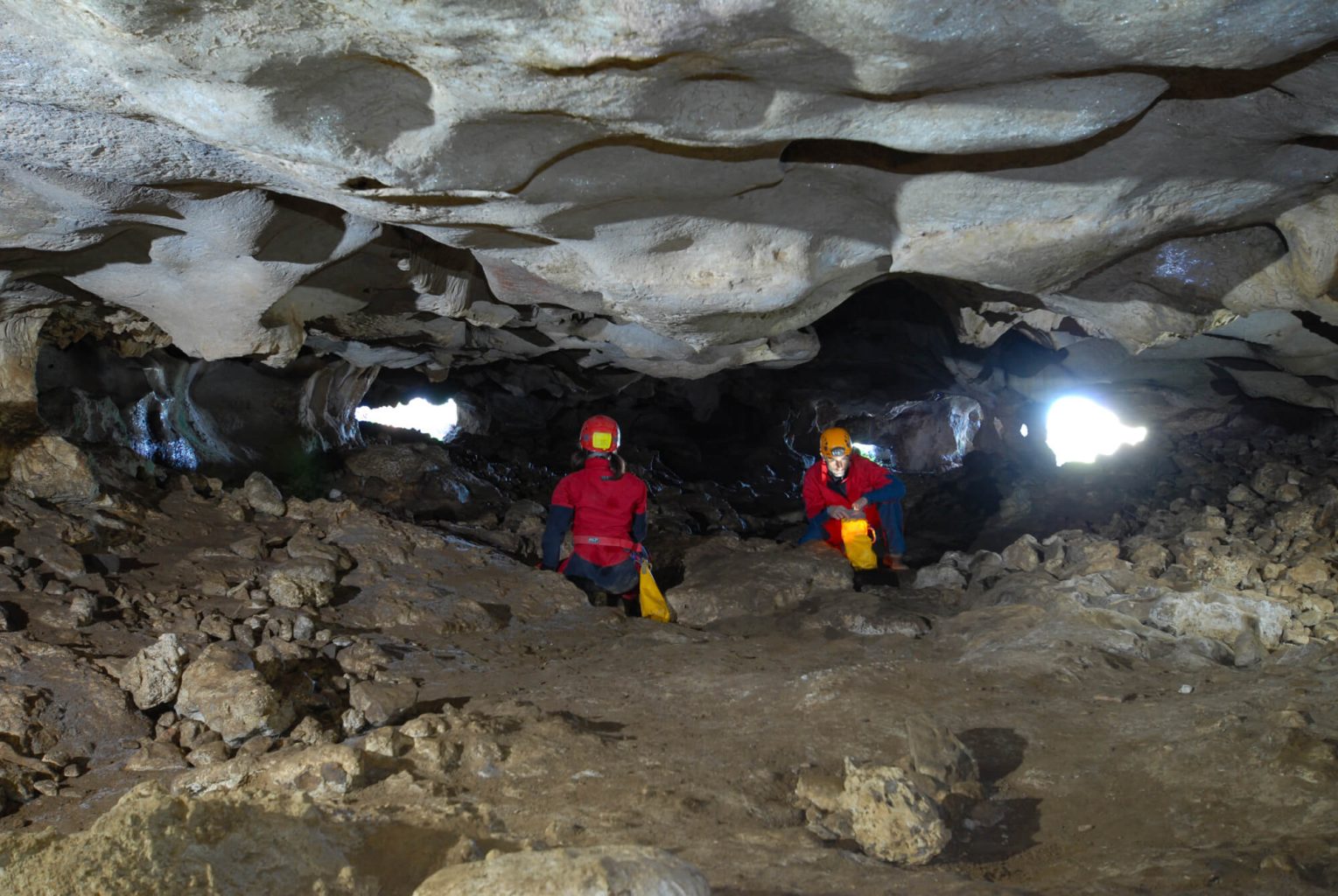 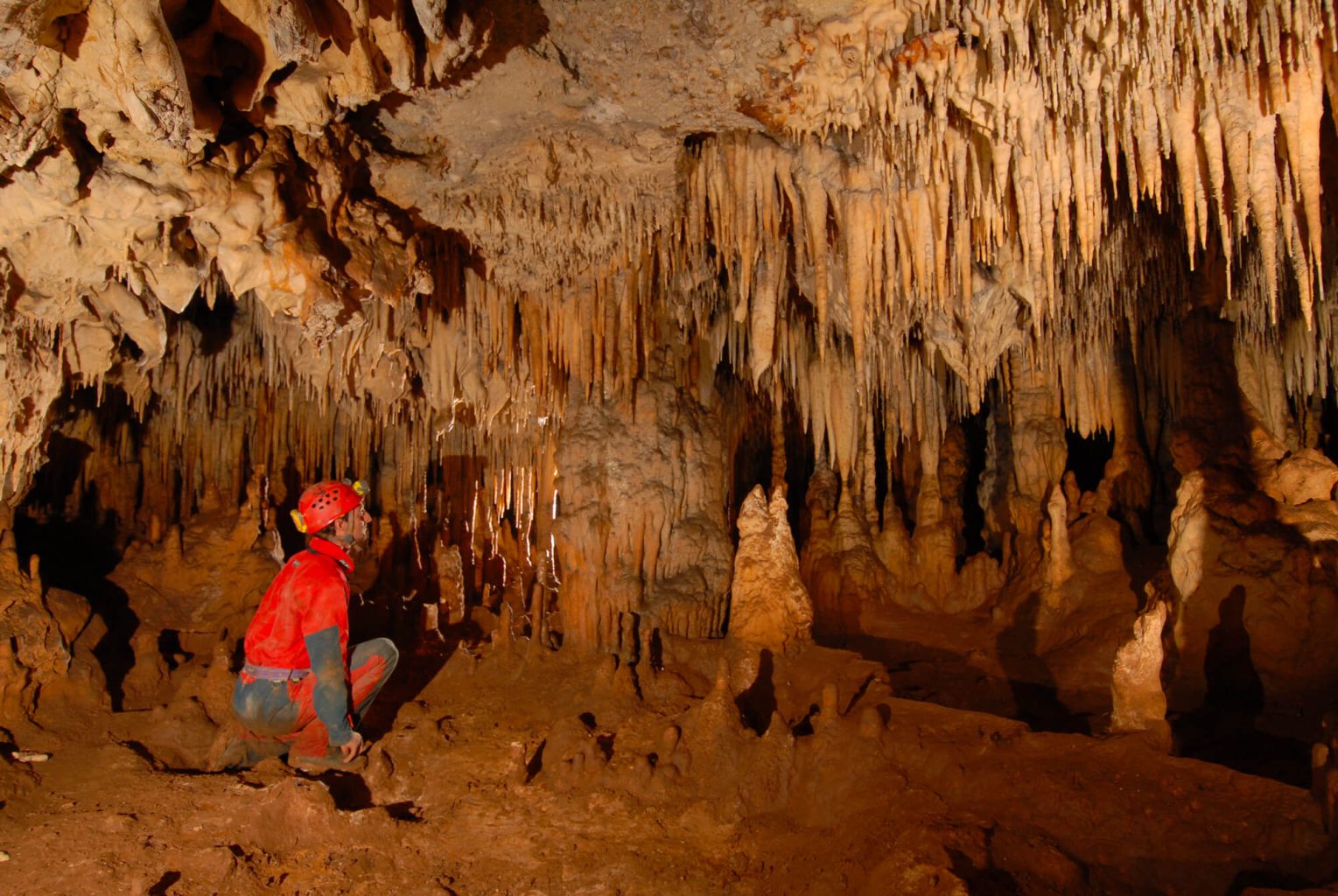 Generally caves are characterized by a rather constant temperature, very high air humidity and complete darkness.

The underground world, though not suitable for plants (organisms at the base of the food chain), is however populated by cave-dwelling animals that are able to get their necessary nourishment from the organic detritus carried by water, from organic matter produced by autotrophic bacteria or from bat guano. These small organisms, (such as insects, crustaceans, spiders, millipedes, mollusks, etc.) which adapted to the extreme environmental conditions of the underground world, are often characterized by changes in their sensory organs, as well as by the variation of their biological cycles and by depigmentation (pigment loss).

The Carburangeli cave is also home to some bats, belonging to the Vespertilionidae and Rinolophidae family, which play a very important ecological role because of their insect-based diet.

In order to protect the environmental balances of the cave, the managing Body of the Reserve has started monitoring the hypogeal climatic parameters through which it is possible to regulate, in a compatible way, the enjoyment activities. 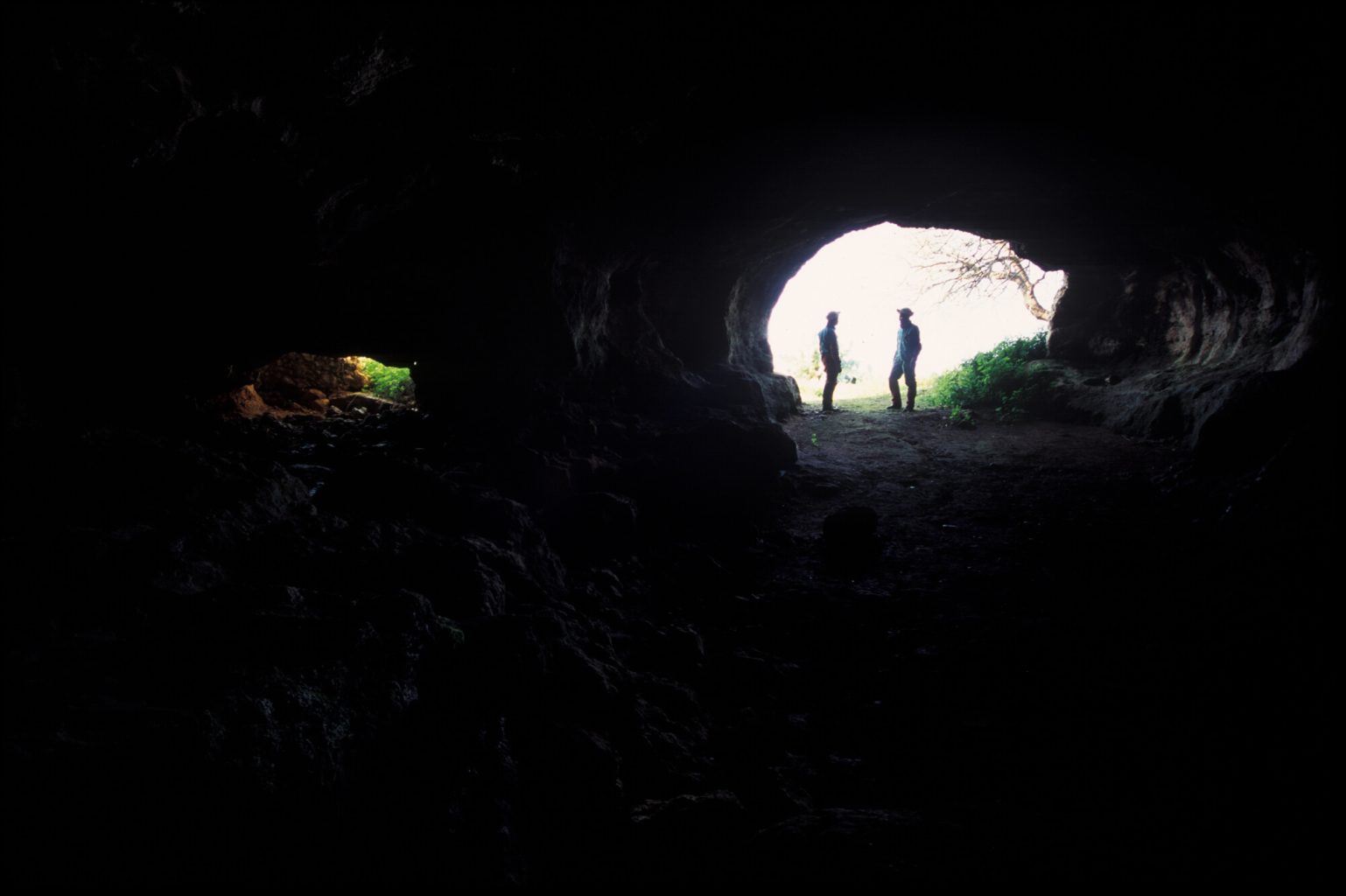 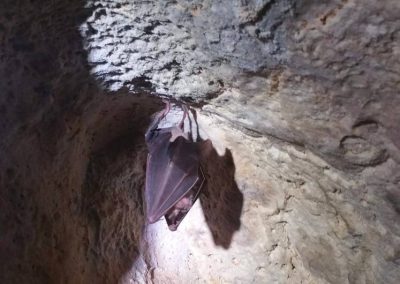 Various fossil remains of animal species no longer present in Sicily, such as the elephant, the bear, the hyena, the bison and the deer, have been found during the excavation campaigns carried out over the last few centuries inside the Carburangeli Cave as well as in other adjacent cavities. Such animals arrived here from Africa and from the Italian peninsula through natural passages, called “bridges”, which generated from the lowering of the sea level during the Quaternary glaciation period. When these natural trails were interrupted, the animals, that remained isolated in Sicily, adapted themselves to the conditions of the local habitat, thus evolving into new species. For some animals, such as elephants, bison and deer, the change in their characteristics was a decrease in size, determining the so called “dwarf fauna”. While others, changed from the original strain due to the increase in size, such as dormice and turtles.

Following is a list of the fossil remains found in the Carburangeli Cave, now on exhibition at the Museum of Paleontology “G. G. Gemmellaro “of Palermo: 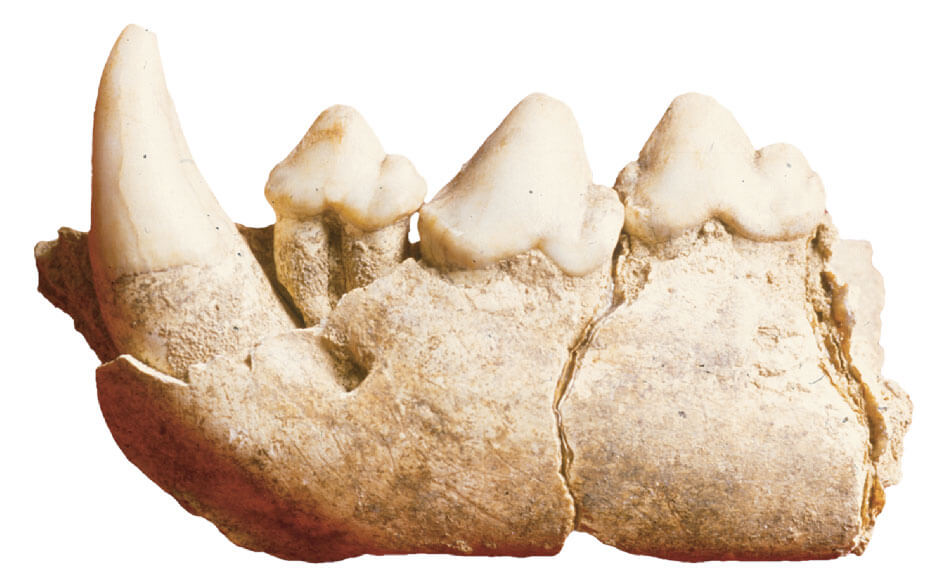 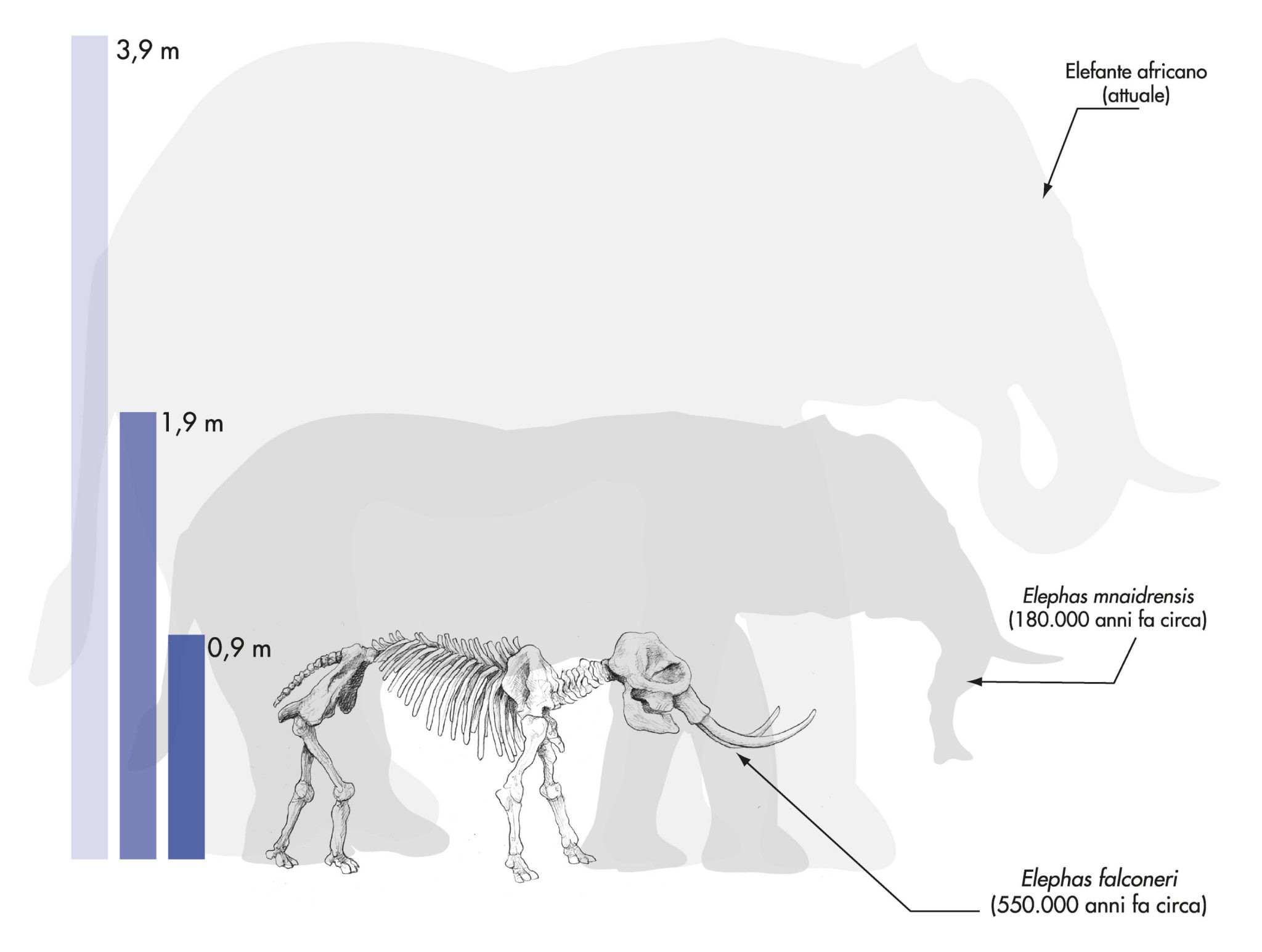 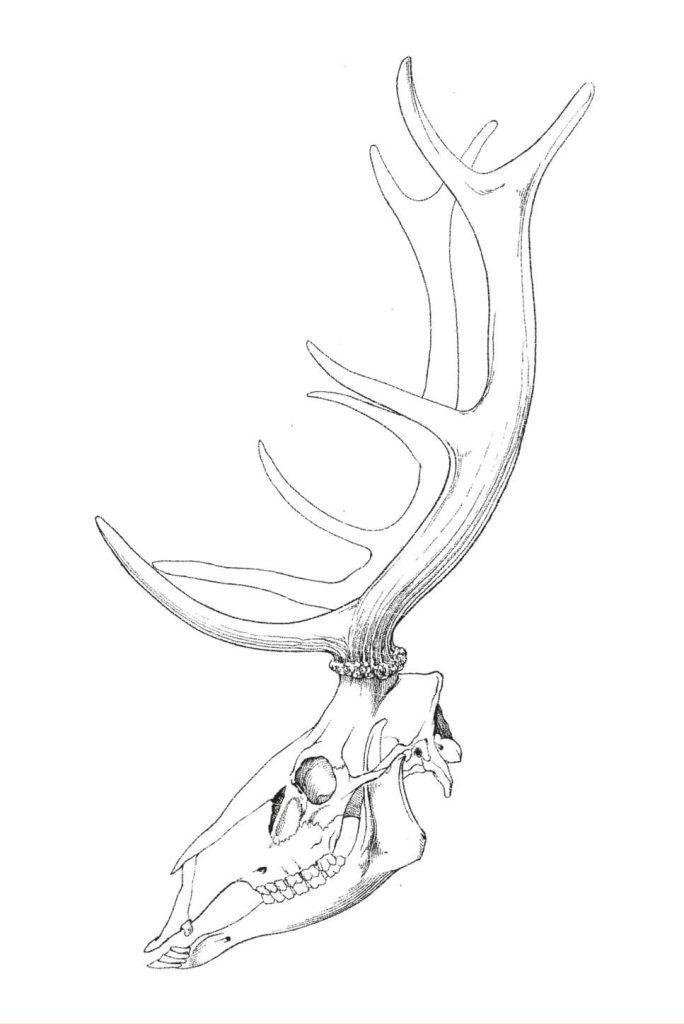 Caves have always been safe shelters for mankind. Inside them it is possible to find some “evidence” of a primordial presence of man. Generally, these traces are represented by drawings on the walls, fossil remains and primitive tools that, spared from the ruining effect of time, nowadays, allow us to recreate fragments of our ancestors’ daily life. The Carburangeli Cave, with its horizontal development and the large opening placed in an easily accessible area, hosted the prehistoric man, protecting him from the cold and the predators.
The archaeological excavations carried out in the large entrance hall, in fact, have brought to light interesting remains and tools dating back to a period ranging from the Paleolithic to the Bronze Age. Among these finds are blades, flint tips used for hunting, pieces of lava stone probably parts of ancient millstones and terracotta artefacts. Next to these remains were also found limpet and snail shells, as well as fossilized bone fragments of deer, goat, wild boar, ox and horse, presumably the residue of meals.
Moreover, as further evidence of the close link between prehistoric men and the cave of Carburangeli, a charcoal drawing, still being studied, can be seen on the wall at the entrance of the cavity, it seems to represent a witch-doctor during a propitiatory ceremony. 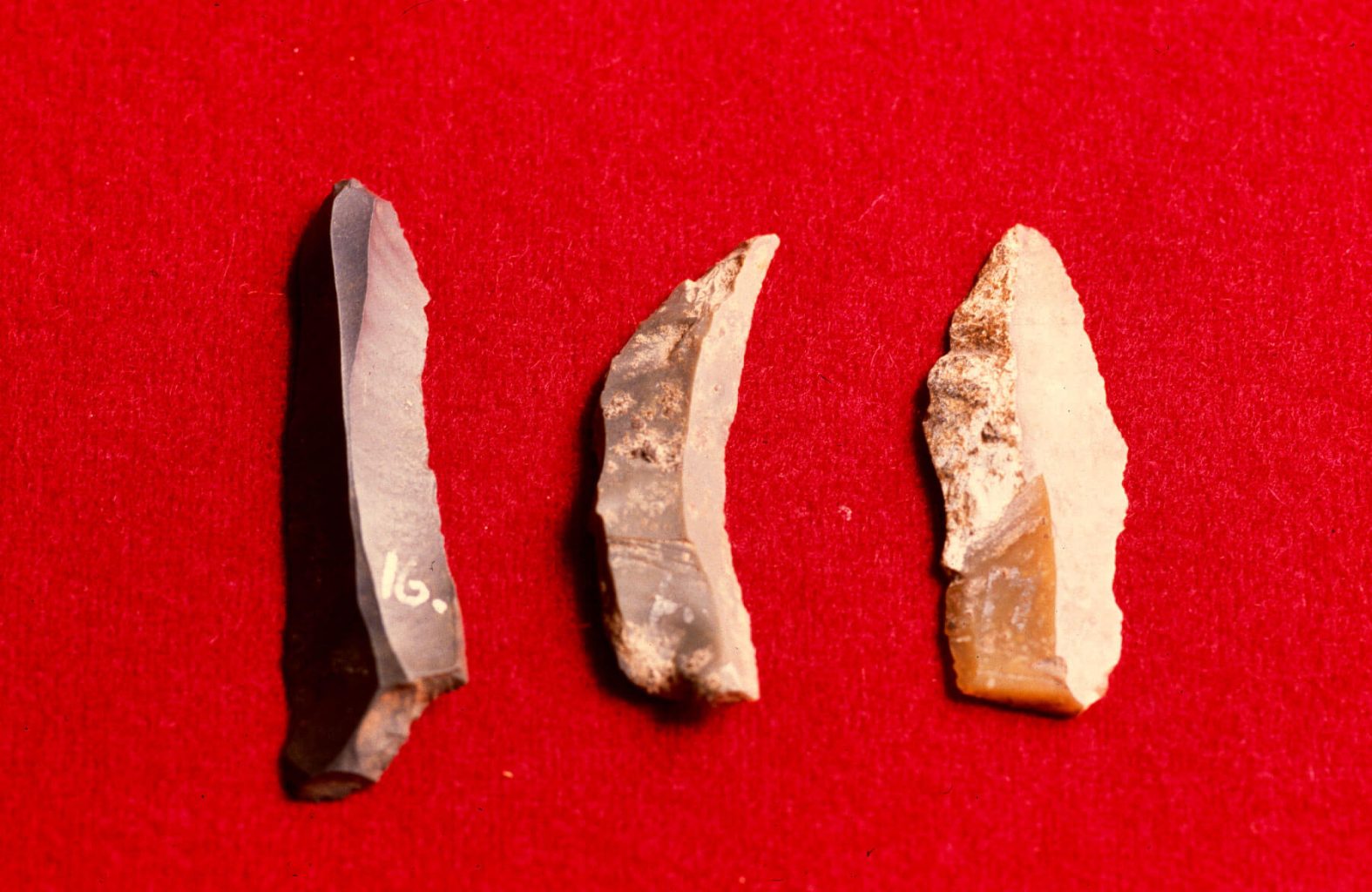 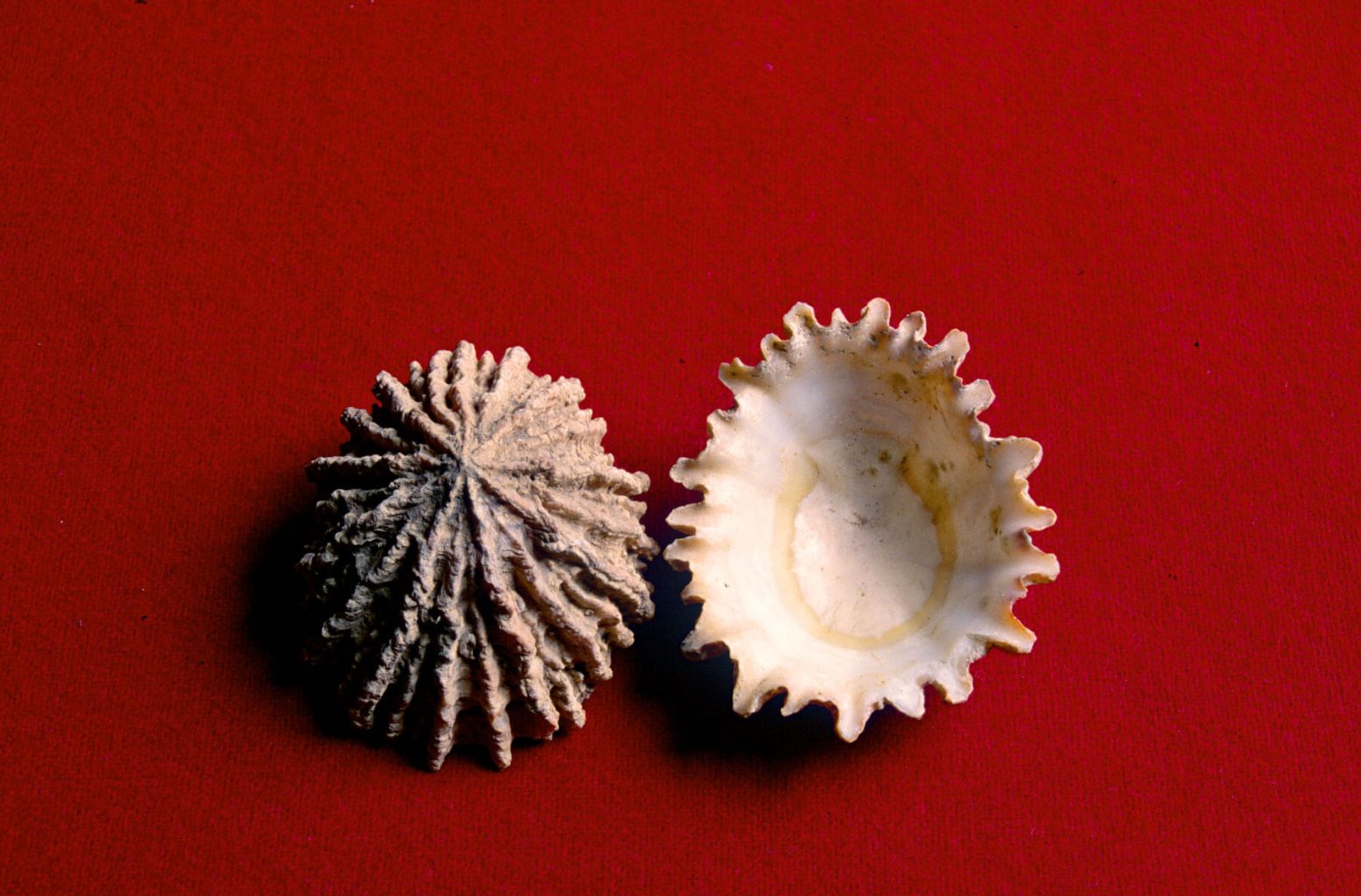 Carini is surrounded by a range of mountains rich in numerous fresh water springs. From a rock 160 meters high, the town overlooks the gulf that stretches from Capo Raìs to Isola delle Femmine. This area has been inhabited since the Paleolithic Era because of its favorable geographic configuration and the richness of the territory. The most ancient archaeological remains, dating back to this period, besides in the Carburangeli Cave, have been found in the Puntali and Maccagnone Caves, as well as in other sites all over the country. The early permanent settlements date back to 1,300 BC, when Cocalo, king of the Sicanos, donated the territory of Carini to the mythical Daedalus for the favors he had done to him. Thus the town of Hykkara was founded; it thrived until 414 BC, when the Athenians, led by Nicias, razed it to the ground and deported its inhabitants. Iccara was then rebuilt further up hill and during the Roman domination it gained considerable importance, becoming the seat of the Bishopric. The variegated mosaics of the San Nicola district and the extensive Catacombs discovered in 1899 by Salinas at Villagrazia di Carini date back to this period. From this moment on, the historical events of the city are affected, as in the rest of Sicily, by the sequence of foreign dominations (Arab, Norman, French, and Spanish) which influenced its cultural and architectural evolution.

Particularly important was the political and economic development of Carini during the four centuries (1397-1812) under the government of the La Grua Talamanca family. In fact, during this period the Castle was considerably modified. Perched on the top of the cliff it is certainly the most representative building of the town.

During the Bourbon government Carini was the seat of the main Risorgimento riots. In 1848 the first patriotic sparks had already started in town, and the Carmelite Convent became the meeting place of the rebels. 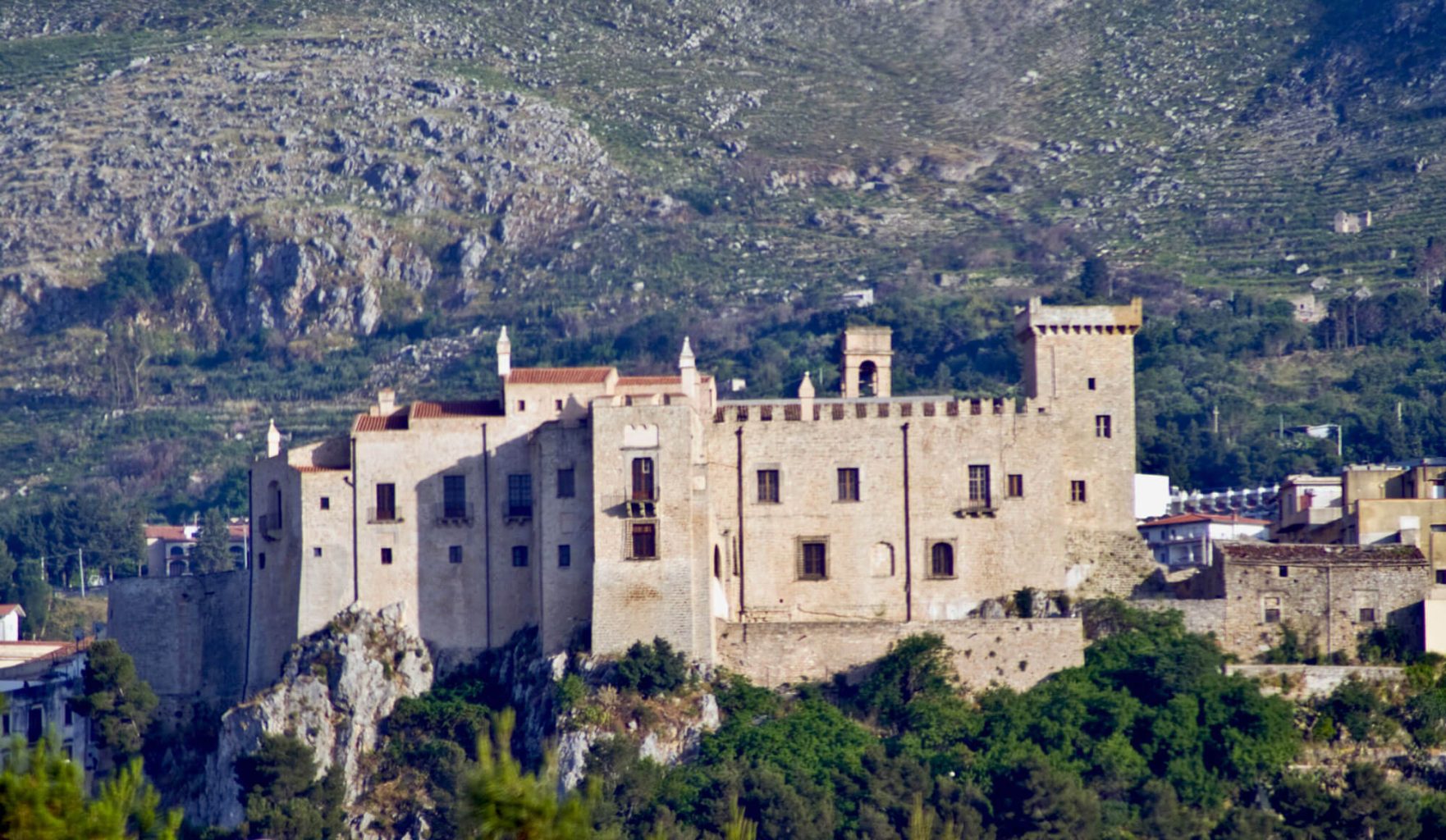 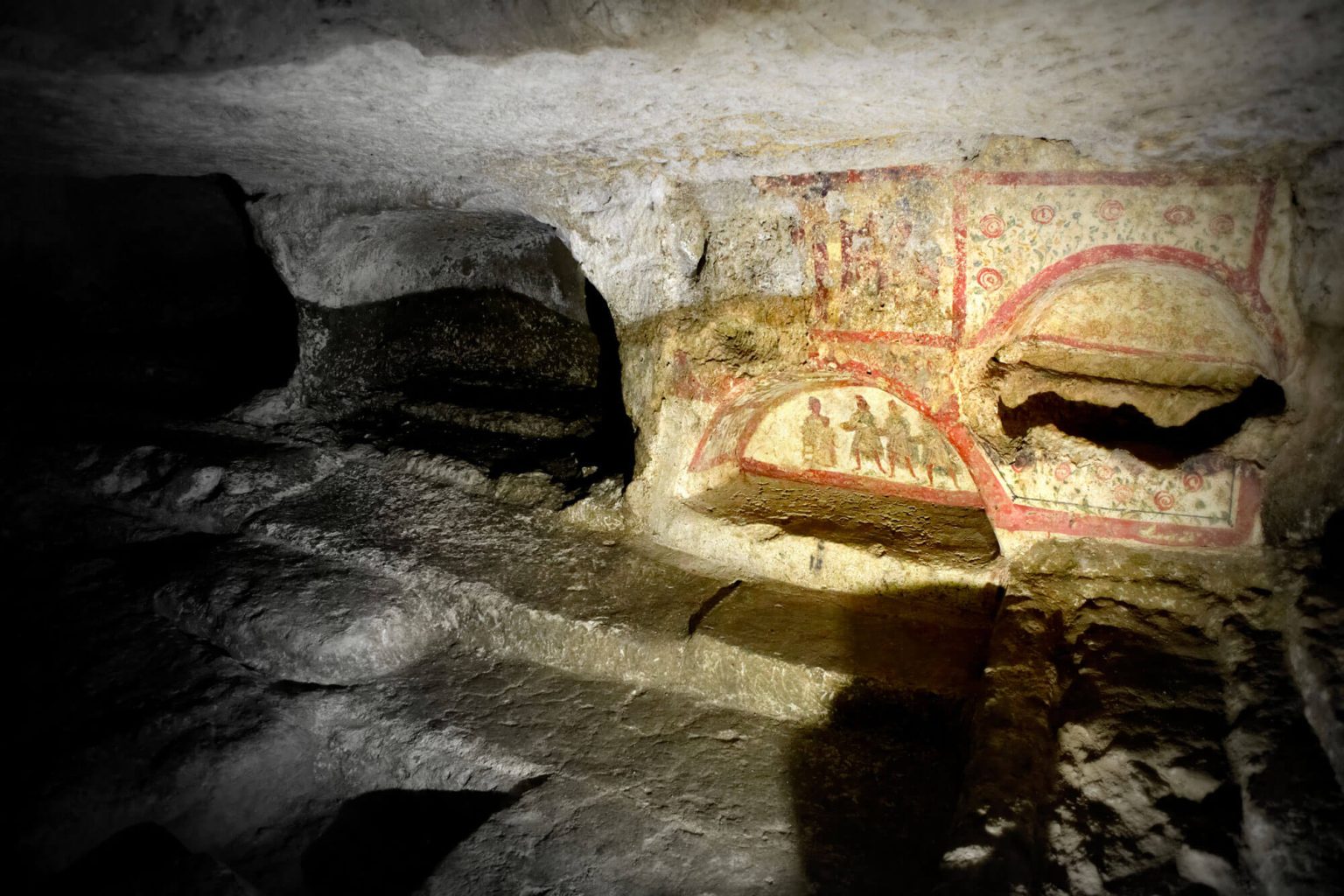